Orbetello, town of the Maremma Grossetana,  is from Grosseto just over 40 kilometers and is located in the center of the homonymous lagoon, important nature reserve created and managed by Wwf , considered one of the most important wintering areas for many species of birds, already a human settlement since the Etruscan period.

In 280 BC the Romans took control of it and at the same time founded the city of Cosa , the political and administrative capital of the territory, near Ansedonia , located on the homonymous promontory, a well-known archaeological site remembered for important engineering works such as the Tagliata Etrusca , from the Etruscan-Roman age, designed to prevent the ancient port from being covered up and the Spacco della Regina .

Orbetello, is divided into several fractions:
– & nbsp; Albinia, developed around the 1950s with the land reform, sadly reaching the news for the flood of 12 November 2012 caused by the flooding of the Albegna river
– & nbsp; Fonteblanda , a small tourist resort on the slopes of Poggio Talamonaccio
– Giannella , located in the center of the homonymous tombolo characterized by long sandy beaches, pine forest and Mediterranean bush
– Talamone point of landing in 1860 of Garibaldi with the Thousand to refuel during the shipment. 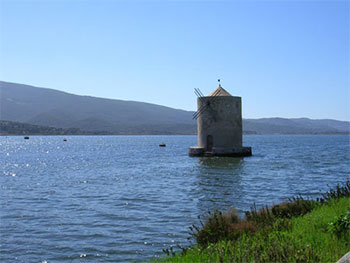